What did the chicken say to the duck?

"Don't cross that road whatever you do... You'll never hear the end if it."

Full Irish breakfast is like full English breakfast except we get white and black pudding plus really good crusty bread. Yum.

Our bus tour around Dublin lasted only an hour. In that time we learned that everyone in this country suffered from the recession caused by Lehman Brothers. Irish left because they had no choice. They had to go where the work was. That's how the suffering has always been here.

I realized my ancestors were among those. They were not able to return to the land they love. So by coming here, in some small way I feel like I'm returning for them. So when the cast sang a mournful ballad last night about coming home, I felt like I had a right to sing it as my song too.

Our tour director also told us that nobody is happy with their government right now. They feel like there are no real leaders in the world. We saw homes covered in "Virginia Creeper" vines of the movers and shakers of this city.

The Guinness family are almost revered here. They gave their huge home to the government and now it is the home of the Ministry of Defense (I think). Their old back yard is now Spencer Green and is enjoyed by everyone. They built worker homes for cheap rent and took good care of their workers "from womb to grave" with full health and dental coverage.

After our tour, Ann Marie took us into Trinity College to view The Book of Kells and The Book of Armagh" about Brian Boru, Emperor or King of Ireland. We also walked through the Long Room in the Library and my cousin, Robin's, ears must have been burning. I kept saying she would love it here. The room was enormous and contains 290,000 volumes. Apparently the College is a copyright institution so that a copy of every book published is kept here. Amazing.

Larry and I had a pint of O'Hara's Red Ale with a delicious lunch. I got soup and sandwich while he got "a board" with seafood, bread, huge capers and crusty bread. Yum.
I actually used a pull-chain toilet in this lovely old building. I thought of my grandmother's house.

We walked around the Temple Bar district and I took a picture of a different bar we went back and visited tonight. We enjoyed a pint and listened to rousing traditional Irish music played by a hot guy on guitar and another on fiddle. We clapped in time to "No, no say never...". It was exactly the experience I was looking for. Another fantasy realized.

I chatted with a young lesbian couple from Kildare. They lived in the country and were visiting the city for the weekend. I told them about my dilemma of trying to get to Skibbereen tomorrow and they encouraged me to ask about in Blarney. They were very sweet.

There is a gay marriage vote coming up soon and yesterday 40,000 people marched in a gay pride parade to celebrate diversity. Rainbow flags are flying all over the city including in our hotel and businesses sponsor flags mounted on their fronts. It's clear to us at least that many support it.

Larry and I did a tasting at the Jameson distillery and bought a small bottle to enjoy here. Later we embarked on a Guinness formal tour that included a free pint and a delicious dinner with our group.

All in all, it has been a fabulous day. Some members of our group think I'm crazy but others love my energy. I just laugh. Right now I must elevate my terribly swollen feet. 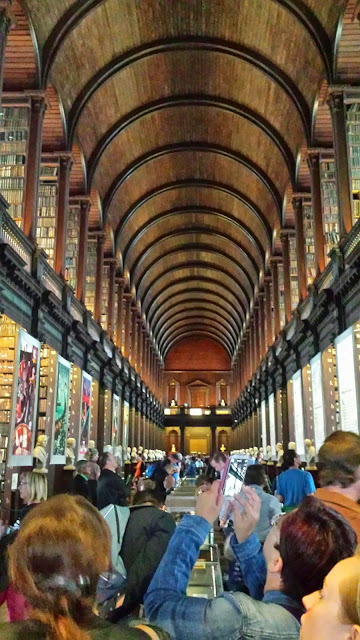 Posted by Kathy Crowley-Gardner at 3:40 PM