From Yeats to Giants

We chatted with a couple from what we guess by their accent to be Belgium.  They were on holiday for a month and had just began touring Ireland.

Our first stop was to a graveyard. We saw a Celtic cross from the tenth century and heard about the origin of the symbol itself. It was believed that a Christian monk put the cross over the Pagan circle to create what Rome also calls the Papal Cross. This cross was also carved with depictions of Adam and Eve, and Daniel in the lion's den.

We were then taken to the grave of W.B. Yeats, Ireland ' s poet. Outside the graveyard is also a sculpture of him with a carved quote from a poem of his about not treading on his dreams.

The doors of the church were adorned with two metal swans and the inside was quite lovely.

An hour and a half drive and a nap later, we were in Derry.  Tony, our local guide first took us on a tour around the city then for a walk on the 400-year wall surrounding it.

Tony was born and raised in Derry and proudly declared that his father,  grandfather and great grandfather all sold tickets to Derry immigrants wanting to flee to America.  In the earliest days,  they fled in search of religious freedom. His family is all buried in the huge cemetary on the hill outside the wall. He wasn't much different from our family.

Tony told us the history of King James the first and second ' s seiges to control the city.  King James I had the wall built after successfully conquering it to the tune of £20,000. The wall is two miles around. After King James II was ousted, he came back with an army to get his throne back.

After he threatened to kill everyone inside, it took 13 orphan teenagers to think to take the keys and lock the four gates to the wall. The seize lasted 105 days and many starved to death. Finally they won out and the boys were credited with saving the city. Thirteen Sycamore trees are planted on the wall in their memory. It's blooms resemble sets of keys.

Tony was a very entertaining storyteller using his hands and feet to stress a point. Every time he talked about shooting someone, he put his arms up like he was holding a rifle. Then he'd kick an invisible can to dramatized kicking the king out if the city. It was priceless.

We had a nice lunch in the beautiful Guild Hall, with gorgeous stained glass windows and an organ with 3,132 pipes! Then we boarded the bus once more for the Giant's Causeway.

This place was fantastic. It is a huge geological formation of basalt columns fused together in various lengths begun initially by a volcanic explosion. We walked on the flat stones out to the sea; careful not to venture so far a huge wave would carry us away or allow us to slip on their wetness. It was really fun feeling like a kid again climbing all around.

Now we're at our hotel Stormont in Belfast across the street from the impressive government Assembly building. We don't have energy left to walk over and explore it.  We only have energy for supper and a nightcap. 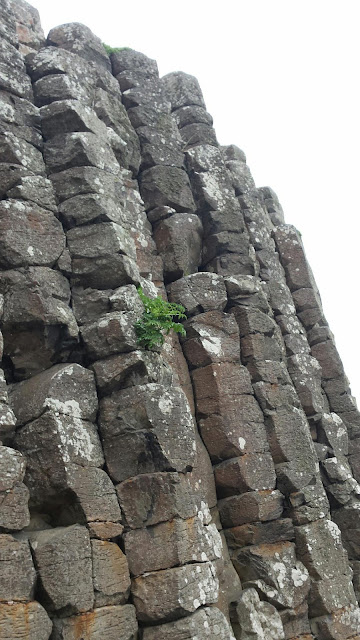 Posted by Kathy Crowley-Gardner at 10:56 AM